Showing posts from January, 2009
Show all

'Like I Never Left' Part II: Eight of This Year's Top R&B/Pop Comebacks

Now that we’ve covered a few of 2009's most anticipated comeback albums, especially those from T-Boz, Kelly Price and Silk, it’s time for part 2 of ‘Like I Never Left’.

Keeping in mind that we’ve got some ways to go, let’s dig right into eight more anticipated releases including the return of entertainment diva Jennifer Lopez and the long-awaited return of Maxwell ! (Click here for Part 1 if you missed it)

“On The 6,” “This Is Me... Then,” “Rebirth,” and “Brave” are all albums that have been released since Jennifer Lopez hit the scene in 1999 so it seems fitting, 10 years later, that she release a Greatest Hits album right ?

Instead of releasing a normal Greatest Hits project, the former “If You Had My Love” singer is coming strong with a few new singles including a Bry…
Post a Comment
Read more

Whitney Houston is so happy, she has refused to record any sad songs for her comeback album, according to collaborator NE-YO. The singer hasn't released a record since her 2003 Christmas offering, One Wish: The Holiday Album. Her last original studio album was Just Whitney, released the same year (03).

The vocal superstar is currently working on an LP to relaunch her career, which is expected to hit record stores later this year (09).
And R&B star Ne-Yo, who has been helping the star put her new album together, insists it won't feature any downbeat ballads - because of the improvement in Houston's personal life.

He says, "People are expecting something fantastic and I think they are going to get it. Whitney doesn't want any sad songs on this record. She isn't going for tear jerkers. She's happy raising her children and wants her music to reflect that. It's already sounding great."

'Like I Never Left' Part I: Seven of This Year's Top R&B/Pop Comebacks

Just like Whitney Houston’s 2008 announcement/single “I want you to love me like I never left,” featuring Akon, 2009 is set to be a year full of new releases from some of R&B and Pop’s adored recording stars. Some have been on hiatus for years, others have been busy with films and other projects. No matter what their reasons are, they’ve picked 2009 to make a comeback.

In celebration of the upcoming releases Singersroom has compiled a list of over 19 forthcoming releases, some you’ve heard a few things about and others that may surprise you... whether they're welcome surprises or not, is up to you to decide.

Stay clicked to Singersroom through Monday as we dive through the three part series ‘Like I Never Left’.

First up on our list is R&B singer/songwriter/actor Tank. Known for bringing R&B hits like “Maybe I Deserve,” “One Man,” and “I Should Have Cheated” to the world both f…
Post a Comment
Read more

And if I should ever go away
Well, then close your eyes and try to feel
The way we do today
And then if you can remember 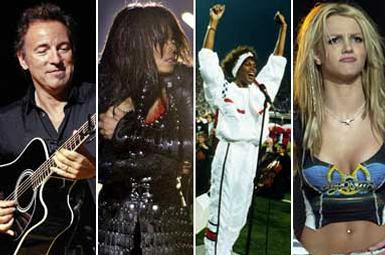 It began simply with marching bands. Now, it's not Super Bowl entertainment unless the performer has a couple of Grammy Awards. Productions grow bigger each year, and have not been without a bit of controversy. But there also have been some unbelievable and unforgettable performances. On Sunday, Oscar-winner Jennifer Hudson will sing the National Anthem and Bruce Springsteen and the E Street Band will perform at halftime of Super Bowl XLIII. Does it get any bigger than The Boss?

不知道大家還記不記得，Davin我先前做了一個投票調查？！
題目是：Do You Think Whitney Houston Can Make a Comeback?

Whitney Houston.com的聲明稿：
Please note that Arista Records has not announced an official release date for the new Whitney Houston album and the information circulating on the internet and in press is erroneous. Whitney is in the studio recording and we will certainly let you know when there is news on a release date to report. Stay tuned and thanks for your support.

Whitney Houston - I Bow Out

‘The Voice’ is back !
Whitney Houston made her first major appearance in 2009 at BET Honors Saturday looking beautiful and ready to get back to business. Whitney was not present on the red carpet before the show but appeared to receive a standing ovation when introduced by Tyler Perry. (see photos below)

Whitney was not the only songbird to return at BET Honors. “Still Standing” singer Monica gave a performance at the show marking her return. (see photos below)

No word on whether she'd be doing any official singing at the Inauguration.

"Please note that Arista Records has not announced an official release date for the new Whitney Houston album and the information circulating on the internet and in press is erroneous. Whitney is in the studio recording and we will certainly let you know when there is news on a release date to report. Stay tuned and thanks for your support"

Whitney Houston is officially on the comeback trail after several months of near silence.

According to sources close to the singer and Page Six, Whitney Houston will make an official debut at Clive Davis' annual Pre-Grammy party in February.

While the "Heartbreak Hotel" singer's songlist has not been confirmed, it is believed that she will perform several cuts from her new album.

According to Clive Davis, "The process has begun".

"We've always said we were looking towards the end of the first quarter of (2009). I do feel good about the material we have and what's been going on."

Ne-Yo, John Legend, Akon, R. Kelly and Will. I. Am have all been linked to the new album.

Whitney Houston's as-yet-untitled album is now due for release in March !