Showing posts from February, 2009
Show all

Legendary singer Whitney Houston reportedly warned Rihanna to cut all ties with Chris after the 'Run It' star was arrested for allegedly beating her up.

Whitney - who had a violent relationship with ex-husband Bobby Brown - is believed to have spoken to Rihanna, advising her: "Don't make the same mistakes I did."

A source told the National Enquirer magazine: "When Whitney heard what had happened to Rihanna, she was close to tears. Right then she knew she had to contact her and urge her to get out of the relationship while she can. She made it clear that Rihanna should dump Chris.

"Whitney told her, 'Whenever you let your heart rule your head, you are bound to run into trouble.' " Despite Whitney's advice, 21-year-old Rihanna has reportedly forgiven Chris and the pair have been in constant contact via phone calls and text messages. The source added: "Even after what Chris did to her, Riha…
9 comments
Read more

The "Star Spangled Banner" as Pop Hit - A Brief History

The first time the "Star Spangled Banner" reached the US pop singles chart was in 1968. Latin pop star Jose Feliciano, who had just made a huge splash on the charts with a top 10 smash version of the Doors' "Light My Fire," was invited to sing the national anthem at the 5th game of the baseball world series in Detroit, Michigan. He strummed his guitar and sang a bluesy interpretation of the song. There was an immediate backlash from those who interpreted the performance as disrespectful. Some believe it dest…
4 comments
Read more

關於『Who do you think sang the best rendition of the National Anthem at the Super Bowl?』投票調查.

前一陣子Davin我做了一個投票調查，題目是：『Who do you think sang the best rendition of the National Anthem at the Super Bowl?』


Whitney Houston said,"I want to honor the man who was honored last night with the Recording Academy`s Industry Icon Award. (He`s) a man I consider to be my industry father, a visionary, (an) executive, a great man of music. Please, Mr. Clive Davis. Congrats, Clive, I love you so dearly."


緊接著I Believe In You And Me
高潮來囉... It's Not Right But It's Okay

Sunday, February 08, 2009
By Roger Friedman
Whitney Houston is back. Last night she took the stage at Clive Davis’ annual pre-Grammy bash and wowed the crowd with a medley of hits. She was clean, sober, and joyous, absolutely radiant and healthy.

Houston knew it was a triumph and she gained confidence as she went from her opening ballad—a shortened version of “I Will Always Love You” through a few of her hits ending with a buoyant “I’m Every Woman.” If there was a fear that her voice was gone, she dispelled it. And while she may not be singing the way she did at 25, the 45 year old is still among the very premiere song stylists in the world. 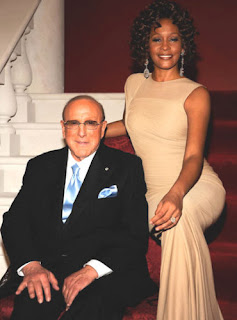 If you want to catch the latest or join in the cyber chatter, head on over to http://twitter.com/marcmalkin for all the real-time details.