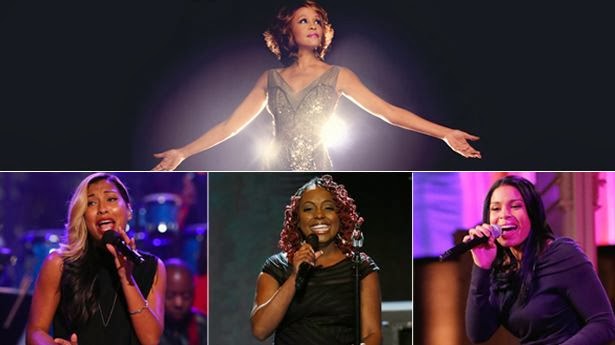 The time has come to end the speculation about who will sing the Whitney Houston tribute at VH1 Divas. Jordin Sparks, Ledisi and Melanie Fiona were tapped to do the honors and are offering up a medley of the legend’s biggest dance hits. The set list reads like the jukebox playlist of every bar I’ve been to on a Saturday night: “I’m Every Woman,” “I Wanna Dance With Somebody,” “It’s Not Right, But It’s Okay” and “How Will I Know.” Sounds like good times!
Now, covering a Whitney classic is hard, much less singing to honor such an illustrious career less than a year after her death. Critics will inevitably run off at the mouth about whoever performs, but these ladies have proven they can stand the pressure and deliver Sunday.

Whitney’s Sparkle co-star Jordin already pulled off “I Will Always Love You” earlier this year at the Billboard Music Awards in front of Nippy’s kin, including daughter Bobbi Kristina. And Ledisi is familiar with the Divas spotlight, since she brilliantly performed Aretha Franklin‘s “Chain of Fools” and other classics for Divas Celebrates Soul last year. Aretha was Whitney’s honorary aunt, after all, so Ledisi’s just keeping it in the family. Then there’s Melanie, who collaborated with big voice Cee Lo Green on “Fool For You.” The song earned her two Grammys the night after her greatest musical influence, died.

That said, what do you think of the Whitney tribute plans? Let us hear it in the comments below and watch Divas honor “The Voice” live December 16 9PM/8C on VH1.