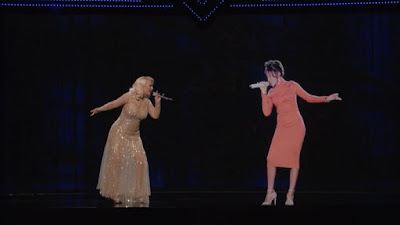 Christina & Whitney - I have Nothing

Whitney Houston's estate canceled the late singer's hologram debut after finding leaked footage unsatisfactory. The Houston hologram was set to duet with The Voice coach Christina Aguilera during the show's May 23rd finale episode. "After closely viewing the performance, we decided the hologram was not ready to air," Pat Houston, executor of Whitney's estate, told ET Online. "We have much respect and appreciation for Christina, and she was absolutely flawless."

Leaked footage finds Houston and Aguilera paired for two songs "I Have Nothing" and "I'm Every Woman": trading vocal runs, singing and unison and harmonizing behind a stage filled with backing vocalists.
"We are so appreciative of the opportunity for the Whitney Houston hologram to appear on NBC's The Voice with a talent pairing as extraordinary as Christina Aguilera and Whitney Houston," the statement said. "We were looking to deliver a groundbreaking duet performance for the fans of both artists … Holograms are new technology that take time to perfect, and we believe with artists of this iconic caliber, it must be perfect. Whitney's legacy and her devoted fans deserve perfection."
According to an Entertainment Weekly source, The Voice pulled the performance after deeming the footage didn't meet the show's production standards. NBC declined comment.
Last September, Pat Houston teamed with Hologram USA to organize a hologram tour that would include special guests and be syndicated across digital and cable platforms. The company's CEO Alki David promised "absolute authenticity" for the jaunt, which would "document parts of her life, her achievements and celebrate" the singer, who passed away in 2012. "The show will not just be Whitney comes on, sings and gets off," he told Billboard.