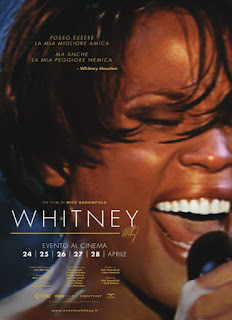 由紀錄片導演Nick Broomfield所執導的
惠媽紀錄片《Whitney：Can I Be Me》 在翠貝卡電影節（Tribeca Film Festival）上映。
Made with largely never-seen before footage and exclusive live recordings, Whitney ‘Can I Be Me’ tells Whitney Houston’s incredible and poignant life story with insights from those closest to her.

From acclaimed director Nick Broomfield comes a new film about one of the greatest singers of all time. Whitney Houston was the epitome of superstar, an “American Princess,” the most awarded female artist ever. Even though Whitney had made millions of dollars, had more consecutive number ones than The Beatles, and became recognized as having one of the greatest voice of all time, she still wasn’t free to be herself and died at just 48 years old. Made with largely never-seen before footage and exclusive live recordings, WHITNEY ‘Can I Be Me’ tells Whitney Houston’s incredible and poignant life story with insights from those closest to her.


前導版預告片片段"The Greatest Love of All"：


"We didn’t want to do anything to upset them — that was never the intention," says Nick Broomfield of shooting 'Whitney: Can I Be Me,' premiering at the Tribeca Film Festival.

"I enjoy doing what I do ... but there’s a lot of it that’s not fun,” a young Whitney Houston confides in the new documentary Whitney: Can I Be Me. The pop superstar’s discontent detailed in the film, which premieres Apr. 26 at the Tribeca Film Festival in New York, forecasts the tragic fall that led to her death in 2012.
No stranger to controversy, filmmaker Nick Broomfield (Kurt & Courtney, Biggie & Tupac) did not receive the blessing of the Houston estate for the project. Using previously unseen footage (made by co-director Rudi Dolezal) about Houston’s 1999 tour, the 69-year-old director explores an exceptional talent and troubled artist in Tribeca’s most-discussed feature.
The film shows the tension between Houston’s pop star persona and her personal life. What did you discover?
Looking at how she ended up was pretty heartbreaking. It’s very different for a black artist coming out of Newark [N.J.] than, say, Mick Jagger, who doesn’t have a massive entourage of people who depend on him. She had all of these people who did, whether she was performing or not, right to the end, which was really why her $250 million fortune disappeared to nothing. All her friends and family had cars and houses, and she basically was paying for it all. She was a generous person, but that was a big drain.
What did Houston’s touring crew, from her backup singers to her hairdresser, want to tell you?
The musicians all thought she was blessed by God. They could play their instruments as loud as they wanted, and she could soar above them, while improvising in the most incredible way. Everyone also remembered her being very funny. She was a prankster: She had incredible comedic timing, was brilliant at imitating people and had this infectious laugh that made people fall in love with her.
How has her estate approached the film?
They were aggressive and sent emails to people telling them not to take part. We didn’t want to do anything to upset them — that was never the intention. I just ignored what the estate was doing, and there were a lot of people who wanted to talk to me. You carry on and make the story that you find most compelling.
Do you think you did enough to capture Houston’s spirit in the film?
We tried to tell it from her point of view as much as possible, to get her voice in there. We asked ourselves at the end of every scene, “Do we understand where Whitney’s heart is?” There are people talking about her, but she’s very alive in the film. She’s anything but dismissed as a drug addict — you can’t help but have respect for her.
Source:The Hollywood Reporter
E-News Only Whitney UK