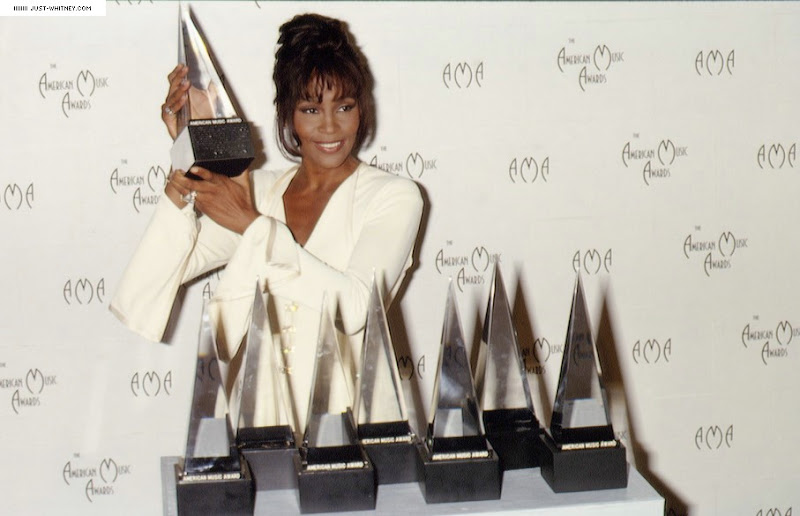 From the moment Whitney Elizabeth Houston first opened her mouth to sing, it was obvious that she was bound for greatness. she was born August 9, 1963, at Newark, New Jersey in the United States to Emily (“Cissy”) Houston who was a member of a vocal group, the Sweet Inspirations, and sang as backup for Aretha Franklin. Whitney Houston began singing at a tender age in the church. She dutifully sang in the New Hope Baptist Junior Choir, aspiring to nothing higher than being a backup performer like her mother. But by the time she was 11, it became apparent that hanging in that background wasn’t in the cards for her.

While in high school, she sang backup for Chaka Khan and Lou Rawls and modeled for fashion magazines. At age 19, she signed with Arista Records, whose president, Clive Davis, groomed from being gospel singer to her success in pop music. Her debut album, Whitney Houston (1985), yielded three number one singles: ‘Greatest Love of All’, which became her signature, ‘Saving All My Love for You’; and ‘How Will I Know’. In 1987, she delivered four more number ones and this earned Houston her first Grammy Award for the single ‘I Wanna Dance with Somebody’.

In 1992, she married singer Bobby Brown whom she divorced in 2007 . She made her motion-picture debut in The Bodyguard; the film featured her rendition of Dolly Parton’s ‘I Will Always Love You’, which stayed at number one for 14 weeks. The film’s sound track dominated the Grammys the following year, and Houston won the awards for album of the year, record of the year and best female pop vocal performance. In the mid-90s she continued acting in films such as Waiting to Exhale (1995) and The Preacher’s Wife (1996), and the sound track of each film generated hit singles for her.

In 1998, Houston released ‘My Love Is Your Love’, which did not sell as well as previous efforts but was appraised by the critics and that earned her another Grammy Award. In the year 2000, she signed a new multi-album contract with Arista for $100 million, but personal difficulties soon overshadowed her recording career. Houston’s relationship with Brown provided fodder for the tabloids, as did her health and financial issues. Her 2002 album, Just Whitney, was a personal response to her detractors, but its sales were disappointing compared to earlier efforts. Other than a lackluster holiday album, One Wish (2003), Houston spent subsequent years in a state of virtual retirement.

In February 2009, she began a comeback effort with a four-song set at Clive Davis’s pre-Grammy Awards gala. The performance was greeted warmly, and in June, Houston announced that an album of new material would be available later that year. ‘I Look to You’ was released in August to positive reviews, and standout songs included the up-tempo ‘Million Dollar Bill’ penned by Alicia Keys and the title track, a slow-building ballad written by R. Kelly.
Whitney’s career is one of the most outstanding in the world so many great achievements ever recorded.
Achievement;

Whitney Houston is one of the best selling female recording artists in history with well over 100 million albums sold.
Whitney is the only artist able to claim eight consecutive multi-platinum albums including her best-of package
On August 2nd, 2001, Whitney inked what appears to be the biggest recording deal in the history of the music biz, signing with Arista Records in a contract worth over $100 million.

The biggest selling debut album in the world is “Whitney Houston” with sales of over 20 million copies.
In 1987,Whitney had US sales of over 9 million, UK sales of over 2 million and total worldwide sales of over 18 million.
The R&B/Gospel influenced ‘I’m Your Baby Tonight’ (1990) sold around 10 million copies.
She is the only artists ever to have seven consecutive number1 singles in the US Hot 100.
The first female artist to debut at number1 in Billboards’ Album Chart was Whitney (1987).

I Will Always Love You spent an amazing 14 weeks at the top of the Billboard Hot100 chart. It remains one of the longest number 1 singles ever.
Exhale (Shoop Shoop) is only the third single to debut at number 1 in the US.

The longest running number 2 record in US Chart History is Exhale (Shoop Shoop) with 11 weeks in the runner up spot.
Whitney Houston is among the five highest paid actresses in the world, and is reported to have collected $10 million for her role in The Preacher’s Wife.
The Preacher’s Wife is the best selling gospel album of all time.
Every time we think there is nothing left to achieve, Whitney proves the world wrong.