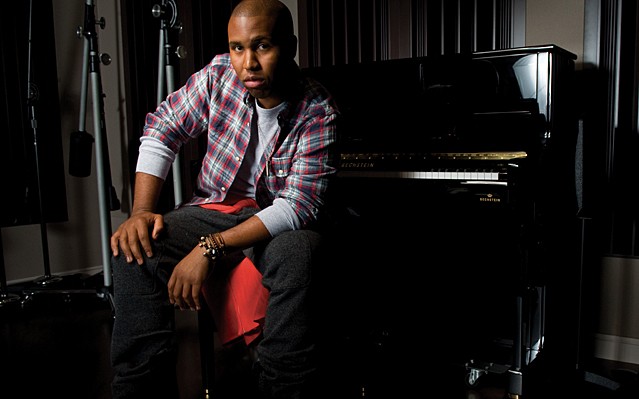 When Claude Kelly started playing the piano at the age of 2, little did he know that he would grow up to be one of today's go-to pop songwriters. After finishing up a degree at the Berklee College of Music in Massachusetts, he returned to New York to become a bona fide artist, instead landing gigs writing for other people like writing 'Daddy's Little Girl' for Frank J's 'Priceless' in 2006. Not long after, Akon enlisted Kelly to write songs for him and his career took off. The New York-based songwriter was soon the mastermind behind chart toppers including Kelly Clarkson's 'My Life Would Suck Without You,' Jason Derulo's 'In My Head' and Adam Lambert's 'For Your Entertainment.' Kelly also co-wrote one of 2009's summer hits, 'Party in the U.S.A.' with UK pop and R&B breakout Jessie J.

His most recent work includes writing 'Gasoline,' which will be on Britney Spears' latest record, 'Femme Fatale,' out today as well as Jessie J's 'Price Tag,' featuring B.o.B. AOL Music recently had the chance to talk to Kelly about his work with Spears, Akon and R Kelly, what makes the perfect song and what would have happened if he knew Michael Jackson was going to sing on 'Hold My Hand.'

You started off as a performer but ended up in songwriting. What attracted you to writing songs as opposed to being onstage?

I'm an only child so I have a very wild imagination. And I think with songwriting, it allows me to be as creative, weird and trippy as possible without being judged for it. So songwriting for me is an escape where I can make up whatever I want. I can create a world, create scenarios or pick other people's brains and tell their stories. I can create something out of that, and that really, really excites me.

You co-wrote 'Gasoline' for Britney Spears' new record, 'Femme Fatale.' Since you worked with her in the past, what was it like working on the new album?

In some ways it's harder because now that I've written [2008's] 'Circus' with her, I have a legacy to live up to. I'm really hard on myself to write something that's good. I put a lot of pressure on myself. But for what its worth, I'm a huge Britney fan, and I'm always trying to make music I would like if I heard it. I wrote the song in New York, and Dr. Luke and Benny Blanco produced the track. And you never know because there are a lot of people who work around Britney, and she's a pretty big machine. You never know what they will like and what they won't like, and I'm grateful that they like it. And when Britney recorded it, she did a great job.

Speaking of 'Circus,' the song isn't only that record's title track but also inspired the supporting tour. How did you feel seeing your song turn from an album track to essentially the theme for the tour?

It's like a songwriter's dream in a lot of ways because for a songwriter everything starts with an idea for [the artist's] life and what I had known. I didn't know her personally when I wrote it, but I read about her and saw that her life was [like] a circus. It was an idea I had on a plane. And to watch that idea turn into a song is a pleasure in itself. Then getting to see that song played to a big audience is a bonus. Then to watch the snowball affect, you can never really expect that. But when it does, it really shows you how far one idea can go. And that's what's inspired me in so many ways in my career that a small idea I thought of on a plane that was I wasn't sure about can blow up to this. It's an honor.

Jessie J is another artist that you've worked with on both her own debut record, 'Who You Are' and co-writing on 'Party in the USA,' sung by Miley Cyrus. What's it like working with Jessie? And how did the working dynamic change when you two were writing for her album opposed a song together for someone else?

Working with Jessie is actually one of the most fun things I get to do. There are some others you do because it's a job. But sometimes you get to work with those artists who really think and act, and Jessie is one of those artists. We clicked right away. Our personalities are similar -- both sarcastic, over the top and don't mind making an ass of ourselves. Jessie is a rare amazing talent coming out of an industry that has a lot of the same. Her voice stands out. Her personality stands out. And I was personally interested in working with someone who I think personally can break the mold and try to be the voice of the next generation.

And for 'Party in the USA,' we actually wrote that song for Jessie for her album, a year and a half before she came out. The label didn't like it. They didn't think it was a good single for her. So they let it go, and in the process of seeing where it could go, it ended up with Miley. And obviously it became a huge hit. So we went back into the studio with Dr Luke to work on her album specifically this time. We know we have a great formula. So we went in there for 'Price Tag' and other songs with the same mentality as the first time. And we definitely accomplished it again because we all had chemistry.

'Hold My Hand' was a song you wrote for Akon and featured Michael Jackson. What was that songwriting experience like?

I didn't know that Michael Jackson was going to sing on it when I wrote it. It was actually special for me because I was supposed to write that song for Whitney Houston. And she, along with Michael Jackson, is one of my favorite artists of all time. So I went into it thinking I was writing a song for Whitney Houston. I already did a few songs for her already so I felt comfortable. But had I known it was for Michael Jackson, I probably wouldn't have delivered and fooled over the pressure on me. But Akon loved it and recorded it. He got to work with Michael and play it for him and Michael got on. I wasn't even there. But I'm kind of glad it happened that way because if I had known it would have been a different song. Unfortunately he's gone, but it doesn't change the fact he loved a song I wrote. It kind of blows my mind.

Working with so many artists from rising stars to legends, how does it feel to be one of the go-to people for pop songwriting?

I try not to think about it too much, but I'm always trying to think about what I'm trying to do next. But sometimes I do sit back and think, "Holy crap, I worked with Whitney Houston or Michael Jackson or Britney Spears," and I'm really honored to work with them. But my goal with what I'm doing is that my legacy will be genre-less. That I was able to write a song with whoever I was in a room with. For me and the artist, it's like therapy because we go through what they're thinking and going through at that moment, and that goes beyond genre or borders or boxes. So as long I'm doing those and keeping up with my other project, then I think I'm doing a good job.

What was the most memorable songwriting experience you've had?

Early on, I learned a lot writing with Dr. Luke and also with Akon. But I would say the most memorable writing experience I've had was writing with R Kelly. He's a genius. He's simply a genius and works on the most awkward schedule. He writes from 2 or 3 in the morning till the sun rises. So we would have this crazy schedule where we would write from 6 till 2 or 3 in the morning then he would come into the studio and hear what I had done. Then he would record from 3 till 10 in the morning. But he always knew what he wanted. He always had this vision. And I learned a lot just watching him do his thing.

What do you think makes the perfect song?

What's the song you wish you wrote?

There are so many. One of my all-time favorite songs is 'I Can't Make You Love Me' by Bonnie Raitt. It gives me chills when I hear it. I also love 'Careless Whisper' by George Michael. And recently, the songs I wish I wrote are 'Teenage Dream' by Katy Perry. It's genius. 'Umbrella' by Jay-Z and Rihanna. But everyday, there's song I wish I wrote.

You were in the studio with Joe Jonas recently. Can you talk about what you two have been working on?

He's obviously working on a solo album. And I went into the studio with him and DJ Hans. And our goal was to write singles. We did two up-tempo records, and my goal with him was to push him vocally and show the world that there's a voice there that they never heard before. Because you know when you're in a group, there isn't much a distinction because there's two other guys -- his brothers -- that were part of Jonas Brothers. So I really wanted to make some kind of thing where people would say, "Holy s---, he could really sing."

The chorus on one of them is really high and really shows that he could hit those notes and really control them. The lyrics are a little edgier, a little sexier. Everything is up-tempo, dark and fun, and he's selling it. He's really coming into that male sex symbol star that we're really missing right now. Obviously Usher is a big sex symbol and so is Justin Timberlake, but there hasn't been a new sex symbol that the girls scream over in a while. And I think he encompasses that a lot.

Watch Britney Spears' 'Hold It Against Me' video.