What does Mariah think about Whitney Houston's return to music?

Mariah wasn't allowed to bring her diva persona to the set of “Tennessee,” as she and producer Lee Daniels both told us. But it was Lee that made it clear Mariah often just plays the role of superstar. Plus, what does Mariah think about Whitney Houston's return to music?

Mariah Not Surprised by Boyle's Breakdown 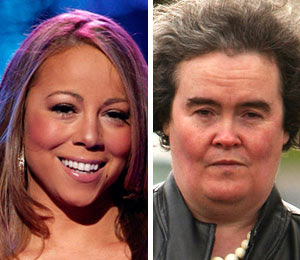 Superstar Mariah Carey tells "Extra" she's not the least bit surprised that Susan Boyle was freaked out by her newfound fame.

The five-time Grammy winner suffered from a physical and emotional breakdown in 2002, and she confesses, "I feel bad for her, but I think in this society we build people up so quickly now, of course it's going to freak some people out. It's difficult. It's got to be tough."

"Britain's Got Talent" megastar Susan Boyle became an overnight sensation, and the sudden fame got the best of her, leading to her stay in a mental health center earlier this week.

On Thursday night, Carey and hubby Nick Cannon attended the Fresh Air Fund's Annual Spring Gala, and Mimi revealed her summer plans will be spent in the studio "working, putting out an album."

Carey also dished about who she wants to record with again. Mariah says she welcomes the idea of working with Whitney Houston for another duet, saying, "I would love to." Back in 1999, Carey won an Oscar when the superstars combined forces for "When You Believe" from "The Prince of Egypt" soundtrack.

The Fresh Air Fund is a non-profit that provides free summer experiences for inner city kids in New York.