Whitney Houston Nears Album Deadline, Will She Make It ? 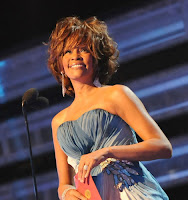 Whitney Houston is getting close to an extremely important deadline and some say she might miss it !

The lauded diva, who has been mounting a comeback for years, is close to finishing an effort Clive Davis admits even he is excited about.

"You wait for the material to justify a new album... it's come in," Davis shared this spring.

With the excitement building and Houston reportedly nearing completion, sources say the diva may miss the all too important Grammy Award deadline of August 31. New for this year, the submission period deadline has been bumped up with the show, which is now set for January 31, 2010, instead of the usual February date. Due to this, Fox columnist Roger Friedman says everyone from Whitney to Mariah is scrambling to finish up.

While things look good for Mariah, who as reported Tuesday, has been tinkered up for a early September date (with a single dropping before the August 31 deadline), Houston may be in trouble.

In fact, the same situation occurred with Alicia Keys' last effort which seemed old when it was nominated for awards this year (Feb. 2009 Grammys)-- the reason being, Keys' album was released after the deadline, making her single "No One" the only option available for voters. In comparison, albums from August and September of 2008, including Jennifer Hudson's self titled debut and Ne-Yo's "Year of the Gentlemen," raked in multiple album Grammy Awards (chiefly Hudson's Best R&B Album Award ironically presented by Houston).

Nonetheless, chances of Houston's album hitting stores this year are very high. A title for the album has not been confirmed by her label. It has been speculated that the album will be titled "Undefeated".