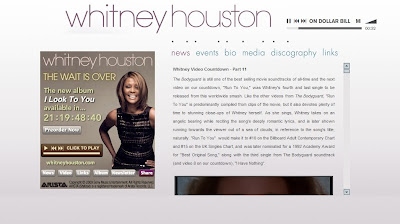 The Bodyguard is still one of the best selling movie soundtracks of all-time and the next video on our countdown, "Run To You," was Whitney's fourth and last single to be released from this worldwide smash. Like the other videos from The Bodyguard, "Run To You" is predominantly compiled from clips of the movie, but it also devotes plenty of time to stunning close-ups of Whitney herself. As she sings, Whitney takes on an angelic bearing while reciting the song's deeply romantic lyrics, and is later shown running towards the viewer out of a sea of clouds, in reference to the song's title, naturally. "Run To You" would make it to #10 on the Billboard Adult Contemporary Chart and #15 on the UK Singles Chart, and was later nominated for a 1992 Academy Award for "Best Original Song," along with the third single from The Bodyguard soundtrack (and video 8 on our countdown), "I Have Nothing".

Whitney Houston - Run To You


Lyrics：
I know that when you look at me
There's so much that you just don't see
But if you would only take the time
I know in my heart you'll find
Oh, a girl who's scared sometimes
Who isn't always strong, can't you see the hurt in me?
I feel so all alone

Each day, each day I play the role
Of someone always in control
But at night, I come home and turn the key
There's nobody there, no-one cares for me
Oh, what's the sense
Of trying hard to find your dreams
without someone to share it with
Tell me what does it mean